Sweden passed the baton to us

Jicin/Falun - Championships 2022 are done and dusted. We are glad that we could be there and see everything first hand. Thank you for welcoming representatives of the next event in Sweden. According to cycling etiquette, we give Kudos to the whole event and hope all the organizers had a good and well-deserved rest by now. For us this means the final year of preparations for WMTBOC 2023 just started. We did some observations and we have some ideas in mind. Here is a little sum-up and teaser for Jičín 2023.

It is very hard to prepare a smoothly running competition. Is there anything you want to do similarly or pay attention to particularly after visiting this year's championships?

Above all, we want to pay close attention to the marking of prohibited areas so that there is no possibility of double interpretation. We are considering using two different scales of map in one race, it worked well in Sweden. And we have to pay attention to the readability of the map, especially on the long distance, if the 1:15,000 scale is used. Regarding the set, I don't want to set the long distance as a long middle distance, and we would like to declare a ban on short cutting, just like in Sweden. As for safety, check the opposite riding really well, especially for the sprint and mass race.

What do you like about the terrains for WMTBOC 2023?

The terrains have a lot of variety from physically demanding areas under Krkonoše mountains to super fast and rideable flat land around the Labe river. So the variety is what I like the most.

In the quarantine guidelines it is mentioned that it is more comfortable for athletes to have a finish quarantine than the starting quarantine. What is your opinion on this?

Having both of them is a little more complicated for the organizers. Having only starting quarantine is reasonable with a short starting interval if athletes are not locked there for many hours. This year the interval for men's elite was shortened in the long distance to 2 minutes. The quarantine for the 70 men was shortened by this from 3 hours (3 min interval) to 1:50 h (2 min interval). Personally I think it is agreeable to have only starting quarantine in case it is maximum 2 hours long with the proper facilities (such as enough space for all the teams, proper warm up area and the possibility to go inside in case of rain). It is also easier for smaller teams with only a few officials. Having only a finish quarantine is not possible in the case of live broadcasting. We would have to wait with all the streaming till the start of the last competitor.

All the arenas were very nice. We would like to add a presentation of our sponsors with their stands. And also some entertainment for the spectators mainly in the arenas in Jičín and Nová Paka.

Is there going to be an opportunity to get some coffee and beer in the arenas?

For sure, yes. One of the sponsors is Bernard brewery so we already know what beer it's going to be.

The logo for the WMTBOC 2023 has already been revealed. Can you describe what it stands for?

The Jičín town lies in a basin between two hills, once Tertiary volcanoes – on the left it is Veliš and on the right it is Zebín. And the World Championship will be in Jičín, hence the pin between them. The converter then displays cycling.

Sweden is known for its progressive approach to ecology. How do you see the ecological site of this year's championships?

The organizers appealed to separate waste and also encouraged competitors to reach the quarantines on bikes instead of cars. It was possible in Falun thanks to the short distance from the main accommodation. I noticed that the food was served in recyclable containers, but I didn't notice much more.

Is there something that you liked and would like to do next year in a similar way?

I liked the short and clear team leaders' meetings, I would like to keep that straight forward attitude. I also liked the warm-up areas in the quarantines. Despite that it worked similarly as well prepared Czech cup.

For sure the starting quarantine. For those in the last starting spots it was simply too long this year. Thanks for the questions and we look forward to seeing all the competitors!

Jičín - a town worth visiting!

Jičín - Every little child in the Czech Republic knows this town thanks to bed time fairy tales and the town is very proud of that. Surrounded by beautiful forests and situated at the edge of an area called Bohemian Paradise it has to be the perfect place for MTBO fairytales that are surely going to happen there in August 2023, right? 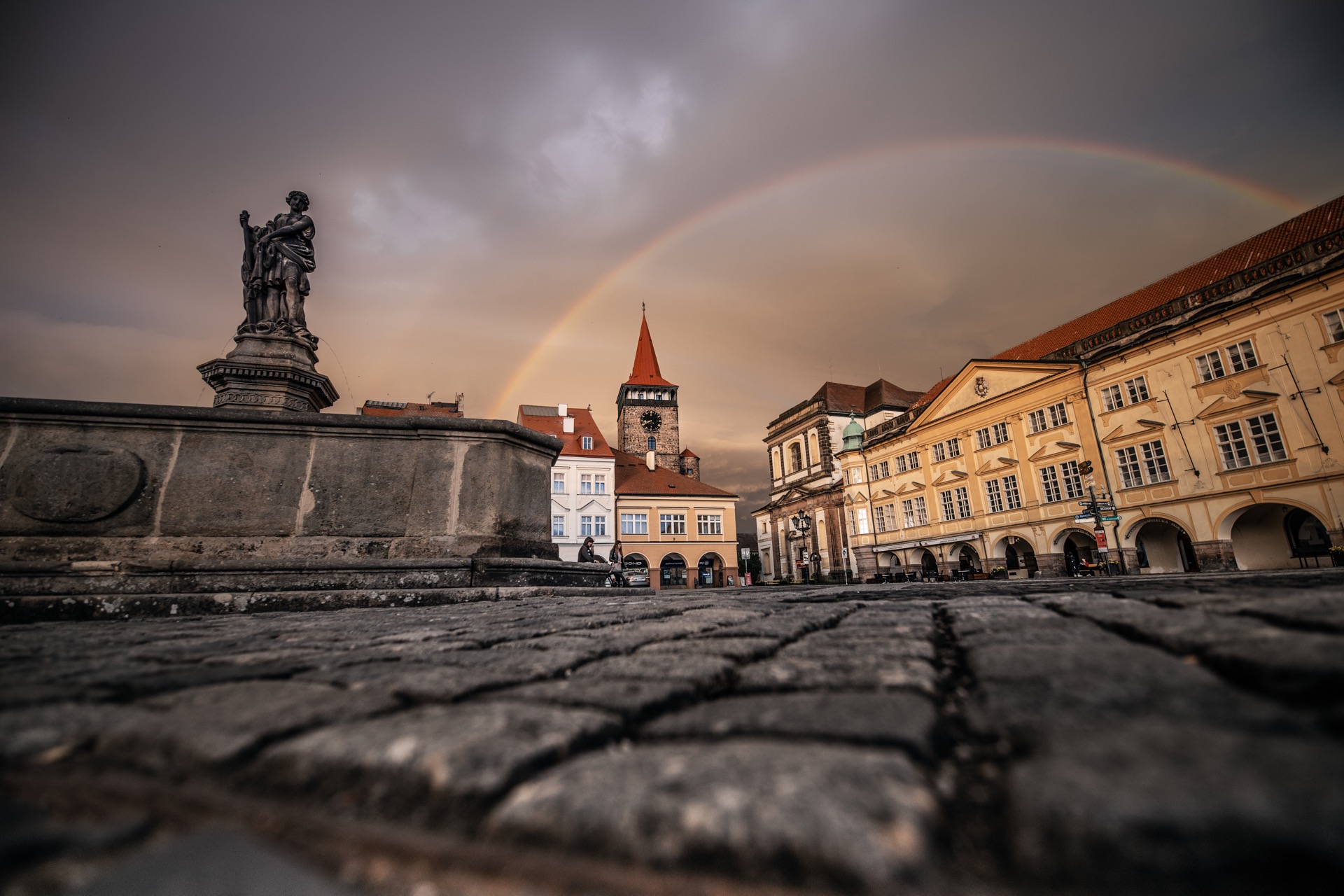 The gorgeous town we are talking about is called Jičín and is situated 90 km northeast of Prague and it certainly isn't an area new to orienteering. Many orienteers from all over the world love forests around Jičín and come back now and then for trainings, camps and races, not to mention that some world champions and medalists in orienteering, both junior and senior, were born here. Finally, diversity of terrain from flat lands to the Czech highest mountains Krkonoše promises some fun biking too.

OK, what’s with all that fairy tales? In the years 1967 and 1968 the first series of short bed time stories about a bandit Rumcajs living in a forest nearby Jičín was broadcasted. It ended with 39 beautiful drawn episodes and a lot of books for children on top. Since then every child in Czechia saw those stories on TV before they went to bed. And traces of the kind-hearted bandit are there to be discovered all around Jičín.

However not only fairy tales happened in the town. It has its own long and rich history too. Picturesque Valenstein square, his palace and many more historical buildings and sites are worth a tour after embargoed area in the city center opens. Also all the journeys to every stage are going to be lined with places worth to visit after the competition. We are going to introduce you some of them in the upcoming articles. 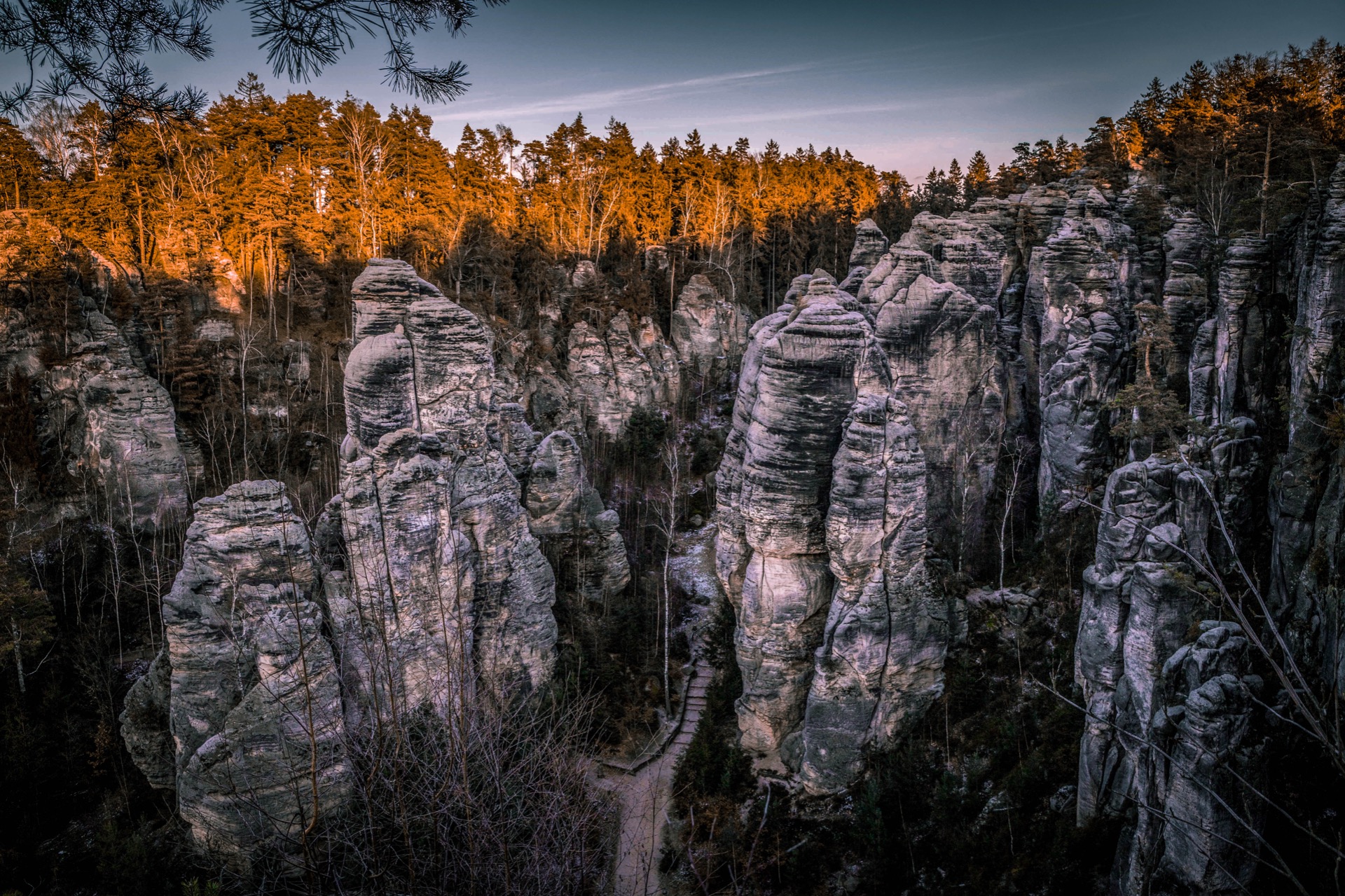 Bohemian Paradise has its borders right outside the town. It was the first Protected Landscape Area in the Czech Republic and its known for sandstone rocks towns, pine forests, beautiful view points, castles and many more gorgeous places. Among orienteers it is popular for control points in rock passages, caves, on rock towers and between other rocky features in beautiful forests.

Now go train hard so Jičín can became your fairy tale next year, too.

On behalf of the organizing committee, I am honored to invite you to the Czech Republic for the World Championship in MTBO 2023. The races will take place around the cities of Jičín, Nová Paka, Mostek, Ostružno, Sobotka and Seletice. The center of the championship will be the beautiful city of Jicin, which is the gateway to the area called Bohemian Paradise.

The combination of the cyclist's maximum physical performance with navigation in unfamiliar terrain is what makes our sport attractive to both racers and spectators.

I sincerely believe that in addition to sports experiences, you will also have unforgettable experiences from the hospitality and beauty of not only the Bohemian Paradise. That is why I would like to invite you to the official training camp, which will take place as part of MTBO 5 days in Pilsen.

We are looking forward to and believe me that we are doing our best to make the 21st World Orienteering Championships unique.

I wish all the competitors good luck and all the spectators a great experience.

First bulletin of the upcoming World Championship in MTBO 2023 in Jičín is out!

Where will the race center be? Where are embargoed areas? Who are the main organizers? What is the planned program? Where will the official training camp take place? And who is on the front page ?! These are all questions that the just-released Bulletin 1 answers! More insider info can also be found on an offcial Facebook page.